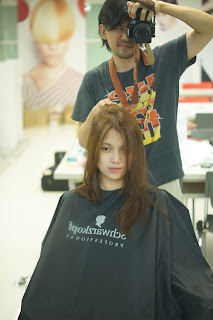 Beginning work at the age of 14 as an assistant in a hair salon in Tokyo.
​​​Worked in Tokyo Ju-gaoka, Shimokitazawa & Harajuku as colorist and
​​​​stylist.
​​​Worked in London at the age of 23 in a hair salon in Convent Garden
​​​​then move to another French hair salon in Clampton Town at the age of 26.
​​​During my stay in London for 3 years, I have done many hair shows every
​​​​week in London West End Supper club, fashion shows in collaboration with
​​​​St. Martin School of Fashions and Japanese Kimono shows. I was
​​​​responsible for the hair styling for the performers in ‘Beatles 15th ​​​​​​Anniversary’ in Palladium. Beside that, I did various hair shows and
​​​​demonstrations on the techniques of hair coloring with different
​​​​organizations in London, eg. Institute of University, and others hairstyling
​​​​schools.
​​​
After London, I’ve proceeded my way to Egypt & India for new inspirations
​​​​on hair styling.
​​​
Moved to Kuala Lumpur, Malaysia as Hair International Director in Shunji ​​​​International Salon with fresh minds and inspiration to the people in
​​​​Malaysia.
​​​
Done lots of hair shows and seminars in various places like Taiwan, Brunei, Singapore, Ipoh, Johor, Sabah, Sarawak, and etc.
​​​
​I was a principal in Shunji & Daisuke International  ​Academy
​Was an Ambassador for Syoss from Japan ​​As an Ambassador for Mizutani Scissors from Japan.
Was an Acccessor for Habia East Asia
Graduated in Vidal Sassoon in Tokyo
Graduated in famous Bomese Coloring School in Tokyo.
Graduated in Ares Japan, a school specializing in hair extension and dreadlock)
Served a short stint in hair biology
Posted by Daisuke Salon at 01:07

Email ThisBlogThis!Share to TwitterShare to FacebookShare to Pinterest
Labels: stylist